We're getting ready for lift-off! Sign up now for Early Access to Zentail Launch - a new, painless way to pilot multichannel.
Join the Waitlist 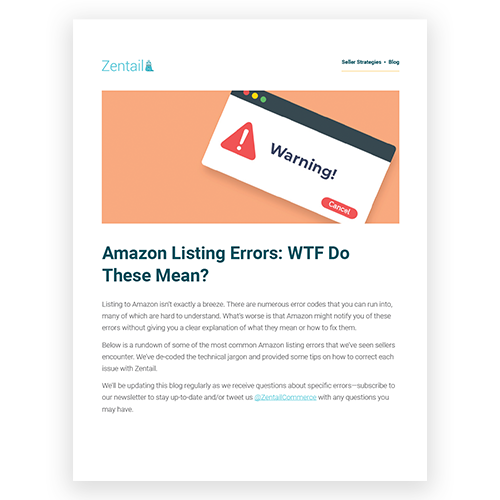 If you're selling on Amazon, you have some familiarity with Amazon's Fulfillment by Amazon (FBA). In fact, Amazon is known for its fast shipping, most popularly 2-day shipping, but moving quickly towards more same-day options, so most sellers have relied on Amazon's FBA to provide their customers with the experience they expect on the marketplace.

Amazon's new 3PL, however, has turned FBA into a fully white-label 3PL. Under the subset of MCF (multi-channel fulfillment), Amazon sellers are reaping the benefits of FBA on other channels as well, like their website and even other marketplaces. What's more, there are now options for Blank Box Fulfillment and shipping with non-Amazon carriers to customers everywhere.

Here's what you need to know about Amazon's new 3PL to start getting in on the action and ahead of your eCommerce competition.

How big is the 3PL space?

The 3PL space is growing rapidly, continuously changing, and adopting new technology and automation to drive steady growth. According to Globe Newswire, the global 3PL market space was valued just under $1 trillion in 2021. This figure is set to reach over $2 trillion by 2030 at a CAGR of 9.1% between 2022 and 2030.

There are already some big names in the 3PL space outside of Amazon that many brands have relied on to get their products to eCommerce customers quickly and efficiently. Some of the most popular include:

ShipBob is popularly known for offering clients complete control of operations with their robust platform, and easy integration with most platforms brands are already established on. ShipMonk, on the other hand, gets a lot of buzz for its FBA prep services, subscription box fulfillment, and seamless warehouse automation (you can access your inventory across multiple warehouse locations in one place).

Deliverr, in particular, has branded itself in a uniquely creative way. Building momentum off the popularity of the powerhouse in the marketplace, Deliverr has been billing themselves as the 'FBA outside Amazon' to stand out from comparable services outside Amazon. By associating themselves with the industry giant's shipping success, Deliverr has been able to accrue a substantial client base.

Amazon's response? Moving towards transforming FBA into a powerhouse MCF to compete with Deliverr and comparable services. This can make it difficult to be the 'FBA outside Amazon' if Amazon dominates fulfillment on other sites as well.

Since no 3PLs have been able to compete on Amazon’s marketplace with Amazon's shockingly fast and cheap FBA option, the addressable market is vast. Amazon's opportunities outside its site will quickly gain traction since customers have grown accustomed to getting their products within a couple of days or sooner and sellers do not need to split or separately manage their inventory.

In fact, Amazon isn't just building momentum off its popular 2-day shipping — the industry giant is ready to crush its own achievements by moving towards same-day to two-hour options. If your business is able to take advantage of these opportunities on other marketplaces and your website, you can expect to see a nice boost in customer acquisition and retention.

What has Amazon done to become a 3PL?

To become a competitive advantage for brands selling online outside of Amazon, the marketplace leader is offering the same delivery speed with MCF that you have grown so comfortable with via FBA.

Just like FBA, Amazon's MCF will offer a variety of shipping speeds, including:

On Amazon Seller Central, they add that "MCF also offers exports (cross-border shipments to a buyer in another country), but only for books, music, videos, and DVDs."

The Blank Box program is a service that will allow you to use Amazon's services off Amazon without their boxes being branded. While it's still being rolled out and tested, the Blank Box program is still in beta. This means that Amazon is currently testing the service, so it has not yet been fully released to all clients. To get ahead of the competition, you can join the waiting list.

With Amazon's MCF carrier selection, you are able to opt-out of Amazon Logistics for the channels that prohibit its use. Of course, this will subject you to a 5% surcharge. The great part about this is when you sync your 3PL with Zentail can automate the opt-out process for you and create a more seamless experience throughout all channels, including syncing your carrier and tracking information from MCF to your other channels that accept Amazon's MCF.

Why does Amazon want to be a 3PL?

With the growth of the 3PL space in recent years, it's no surprise that Amazon has decided to help their sellers expand into new channels easier with Amazon MCF. After all, Amazon FBA has already been a huge success for Amazon and its third-party sellers.

They're also not the only eCommerce company putting more focus on fulfillment, so this may be a proactive response to the evolution of online selling experiences. Shopify introduced their own Shopify Fulfillment Network in 2019, allowing eCommerce sellers to not only sell on all their channels but:

What does this mean for Amazon?

Well, Amazon already has fulfillment centers all over the nation —more than 110 fulfillment centers in the U.S. and 185 globally to be exact. Expanding into multichannel fulfillment will allow them to maximize their potential with each location, utilize warehouses they already have established, and even have their own drivers to complete the delivery.

So, while this move to the 3PL world will undoubtedly increase their bottom line, it was a move that just made sense for Amazon considering their domination in shipping and delivery already.

Are other marketplaces OK with sellers using Amazon to fulfill?

Although Amazon wants to help sellers on other marketplaces and their own websites with MCF, not all marketplaces are willing to let them. In fact, some have even gone as far as prohibiting the use of Amazon fulfillment on their marketplace.

Currently, no. Walmart marketplace will not allow you to use Amazon fulfillment while selling on their site. They will even suspend/ban sellers who use the MCF service as it's considered competitive.

On Walmart Seller Help, the marketplace answers the question, "Is Fulfillment by Amazon (FBA) allowed to deliver the items to Walmart customers?" with, "No, Sellers should not use FBA or any system that will deliver items purchased through Walmart in competitors' packaging, as this implicitly advertises another marketplace and causes customer confusion."

Walmart adds that "non-compliance may result in warnings, selling restrictions, or even suspension (temporary or indefinite). If you enter a tracking number starting with TBA in Seller Center, it will be rejected by our system as it is strictly prohibited. This will result in no tracking information, and the order could be canceled automatically."

As for eBay, they allow Amazon FBA on their marketplace platform without consequence. All you have to do is:

This is likely because eBay's list of integrated shipping carriers does not include Amazon.

Online hardware and electronics retail company, Newegg, does allow sellers to use Amazon Logistics when fulfilling orders on their platform. Keep in mind, however, that on their list of Newegg Authorized Carrier, the company states that "carriers such as Amazon [are] only traceable if shipments are generated from MCF in which sellers own the inventory and using their fulfillment services to generate shipments."

You would not have to worry about tracking issues when using Amazon Logistics on Newegg since they mark the integration as traceable on their carrier site.

Web stores like Shopify, WooCommerce, and BigCommerce are easily integrated with Amazon MCF if you want to utilize your Amazon inventory on other eCommerce sites. According to their supply chain site, Amazon built a first-party app in the BigCommerce app store. This will allow BigCommerce sellers to automate their orders using Amazon's fulfillment — whether you're currently selling on Amazon or not.

Amazon has positioned itself to be the 3PL of global ecommerce, and is willing to help sellers find success on non-Amazon sales channels to grow their MCF business. The 3PL space is too big and growing too quickly to ignore, and Amazon can easily leverage it’s investments in FBA to provide this valuable service to sellers.

Time will tell how comfortable other marketplaces will become with Amazon MCF. One one hand they’re contributing to Amazon’s fulfillment network and on the other hand by disallowing it they’re creating huge barriers to entry for sellers to migrate from Amazon onto their marketplace.

Shopify says goodbye to its native Amazon integration, leaving many sellers to wonder what happened. Here are four theories & two alternatives to consider.

The Great Ecommerce Race: Is Google Shopping Still in the Running?

Google was thought to be a force to reckon with in ecommerce, but there's still a lot to be desired. This begs the question, is Google Shopping worth your time?

Amazon MCF: ﻿What's New & How to Tell If It's Right For You

Amazon Multi-Channel Fulfillment (MCF) offers Prime-like services for non-Amazon orders. Could it be right for you? How does it MCF work & what should you know?